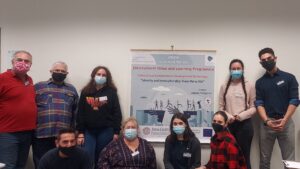 We, at Fotoessa, are so proud! A major intercultural training initiative to bridge civil society and academia has been successfully completed! We would like to express our gratitude to the students of the International Honors Program of the American College of Greece – Deree  for their fruitful participation in our “Intercultural Competences Development Workshops”.

This training project was implemented by Fotoessa -for the first time in Greece- within the framework of the Anna Lindh Foundation’s Intercultural Cities and Learning Programme. The initiative was also organised on the occasion of the celebration of #MediterraneanDay (28 November) aiming to stimulate civil society action for the advancement of intercultural dialogue at the EuroMed region.

The 4 days/10hrs workshops titled “Identity and Interculturality”, took place on Deree’s hospitable premises on the 22nd, 23rd, 24th of November and were completed with a virtual closing session on the 29th of November.

This Fotoessa’s project responded to the greater need for raising awareness in Greece -especially among youth- about Intercultural Citizenship Education and Dialogue. Unfortunately, these notions remain commonly unknown or -worse- they have negative connotations, a condition which has been aggravated by the pandemic’s polarisation of the Greek society. Since our participants are already students and active members of the civil society of Athens, we are excited to have trained a group of young influencers and multipliers, able to disseminate the positive narrative of Intercultural Education & Dialogue.

During the workshops, our participants had the opportunity, through experiential learning, self-discovery and creative interaction, to address issues such as personal and collective identity, multiculturality, interdependability, citizens’ coexistence and synergy. The participants also explored common challenges such as stereotypes and prejudices and sharpened necessary intercultural skills for individual and collective sustainable development, such as active listening, empathy and critical thinking.

Fotoessa would like to warmly thank the Director of the International Honors Program, Dr Georgios Papageorgiou and Dr Helena Maragou, Dean of the School of Liberal Arts and Sciences, for providing the opportunity for such an initiative to take place. Our impeccable communication and cooperation, with both the staff and the students, just underlined the fact that Deree is a natural incubator of pioneering spirit and intercultural values, such as critical thinking, inclusion and equity.

Dr Stefanos Vallianatos, Head of the National Network of the Anna Lindh Foundation Greece, saluted the workshops with a presentation of ALF’s values and activities and Civil Society in the EuroMed region.